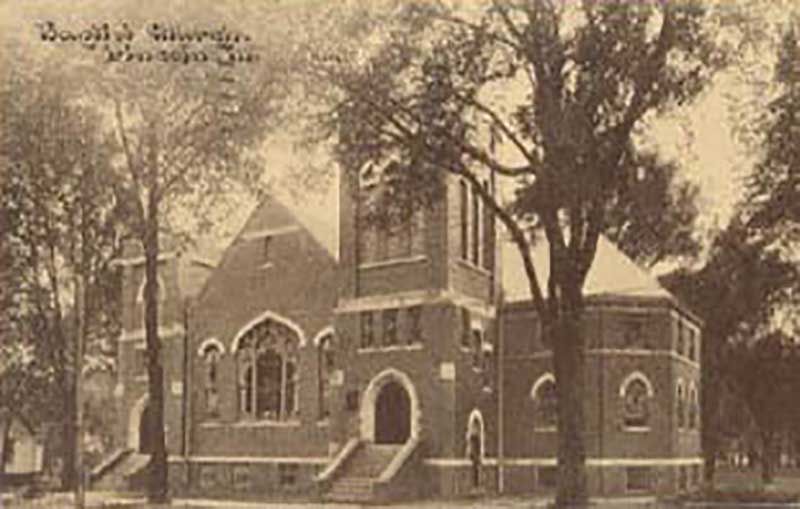 The Baptist Church shares a long history with Lincoln and Logan County. Baptists were the first to establish regular preaching points in Logan County in 1830, and from these early beginnings they expanded throughout the area. The First Baptist Church of Lincoln has been in continuous service since it was organized on March 10, 1856, with 11 charter members under the leadership of Rev. Thomas Reese. The first meeting place was in the First Ward School on Clinton Street, and later in that same year a small brick church was built at the corner of Maple and Fourth Streets. In 1866, having outgrown the original facility, the First Baptist Church sold it to St. Mary’s Parish, and it became St. Mary’s Parochial School.

Property consisting of two lots at the corner of Broadway and Union Streets was then purchased and in 1867, a $6000 frame church which seated 400 was built and dedicated on April 21, 1867. In 1872 a fire broke out, but the church was saved by the city’s volunteer fire department. In the 1880s and 90s the Sunday School department was established. In 1902, the church bought a building to house a Baptist mission, and 1904 saw the purchase of a lot and tent at the Chautauqua grounds.

By 1908 the congregation had again outgrown its building. The church building and parsonage were sold and a new church was built on the second lot in its present location. Completed in 1909, the new church building with all of its equipment was completed at a cost of $20,000. The present-day brick building was dedicated with a week-long program July 10-15, 1910. At that time the church was completely clear of all debt, and in an appropriate ceremony, the mortgage was burned. The first Daily Vacation School was held at the church in 1920 and lasted five weeks. The first Men’s Brotherhood was organized, and Christian Education classes were started in cooperation with the city school system.

Moving forward to the present-day in 2019 and 2020, a comprehensive renovation of the entire church was undertaken with special emphasis on the sanctuary and its furnishings.  Numerous projects including carpentry, plastering, mortar repair, painting, and carpet replacement have been undertaken and completed by members and friends of the congregation.  Others are still ongoing.

The First Baptist Church of Lincoln has served our community over the past 160-plus years — in good times and in bad — through times of uncertainty, war, pandemic, the Great Depression, and civil unrest. With an eye to the future, land has been purchased for yet another church building. Under the present day leadership of Rev. Ray Pepple, we look forward to continuing to serve the Lord Jesus Christ both here in Lincoln and Logan County as well as wherever the Lord may lead.

Learn more in our church blog